!Xaus Lodge is the winner of the Most Compelling Sustainability Story for the WTM Africa Awards 2020 inaugural African Travel Week Travel & Tourism Awards.

Here’s the nomination that was submitted:

This campaign is about bringing the international focus of astro-tourists, environmentalists and adventure travellers to the Kgalagadi’s !Ae !Hai Heritage Park, and !Xaus Lodge. It is a story of seeing beyond the norm, understanding management of artificial light in a sustainable manner, and integrating best practices into sustainable environmental and cultural protection. 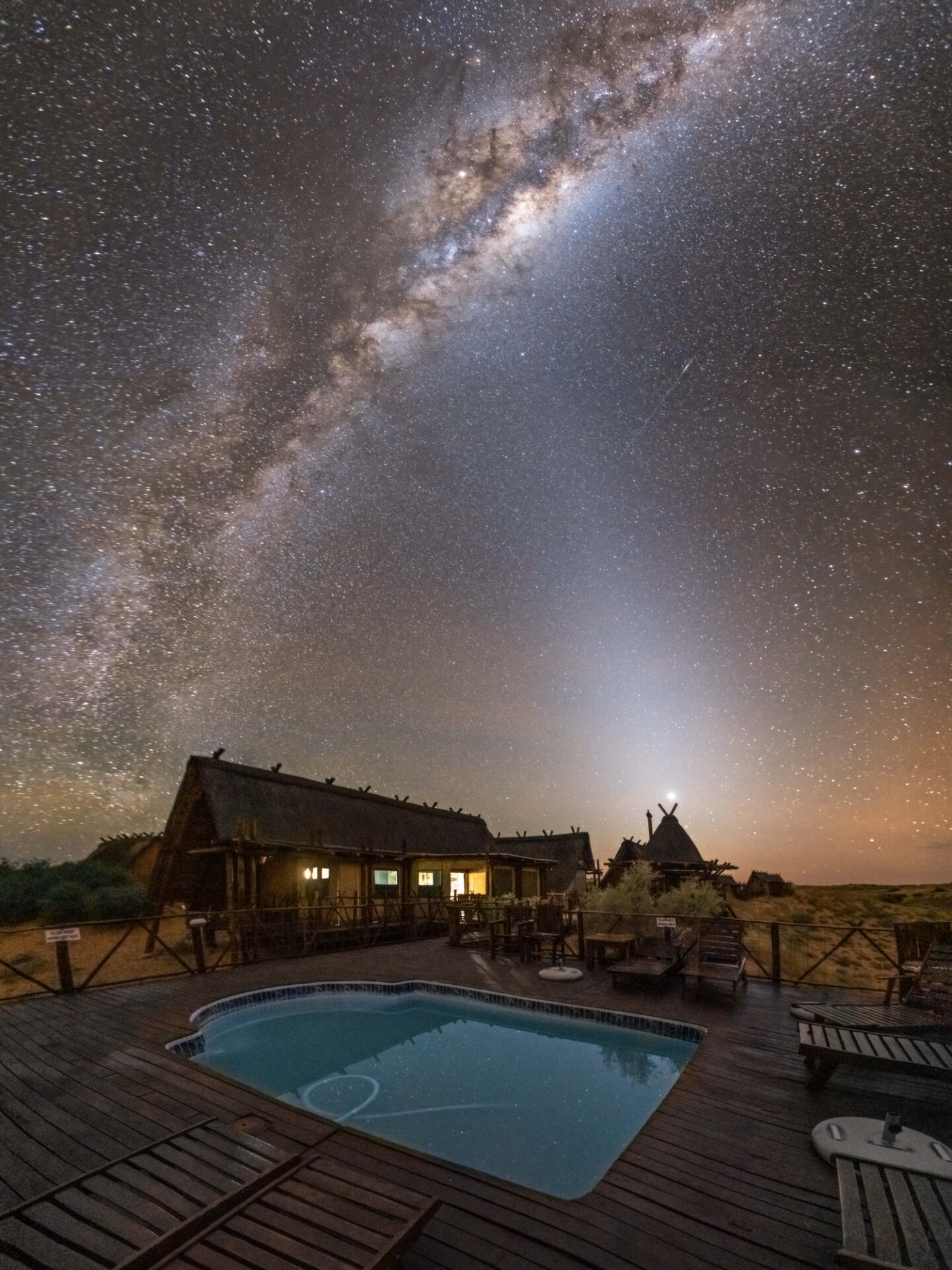 !Xaus Lodge is in the Kgalagadi Transfrontier Park. Born out of the !Ae !Hai Kalahari Heritage Park land claim settlement of 2002, it’s owned by the local ǂKhomani San and Mier communities. Graded 4 star, and Fair Trade Tourism certified since 2012, it offers tourists a full-service desert safari experience which includes game walks with ǂKhomani San guides, game drives, interactions with crafters and a profound opportunity to sit on the red sands of the Kalahari as day turns to night.

Here you cannot but contemplate life, the universe and everything.  The stars of the Kgalagadi are so bright that the night sky provides some of the most astonishing scenery in the Park. Ensuring a future for the Dark Skies was an imperative for any environmental sustainability program.

But while the stars are all around at night, keeping perfectly dark skies is increasingly difficult in the world of power generation. The area around !Xaus Lodge has a SQM (Sky Quality Measure) of 21.89 – out of a maximum possible score of 22, making it one of the darkest places on the planet.

Ill-advised or poor lighting practices can ruin dark skies, and the IDA’s certification program helped guide the process to get to best practice. Good sustainability practices, and stewardship, requires that the natural phenomenon be maintained, and benefits future generations. 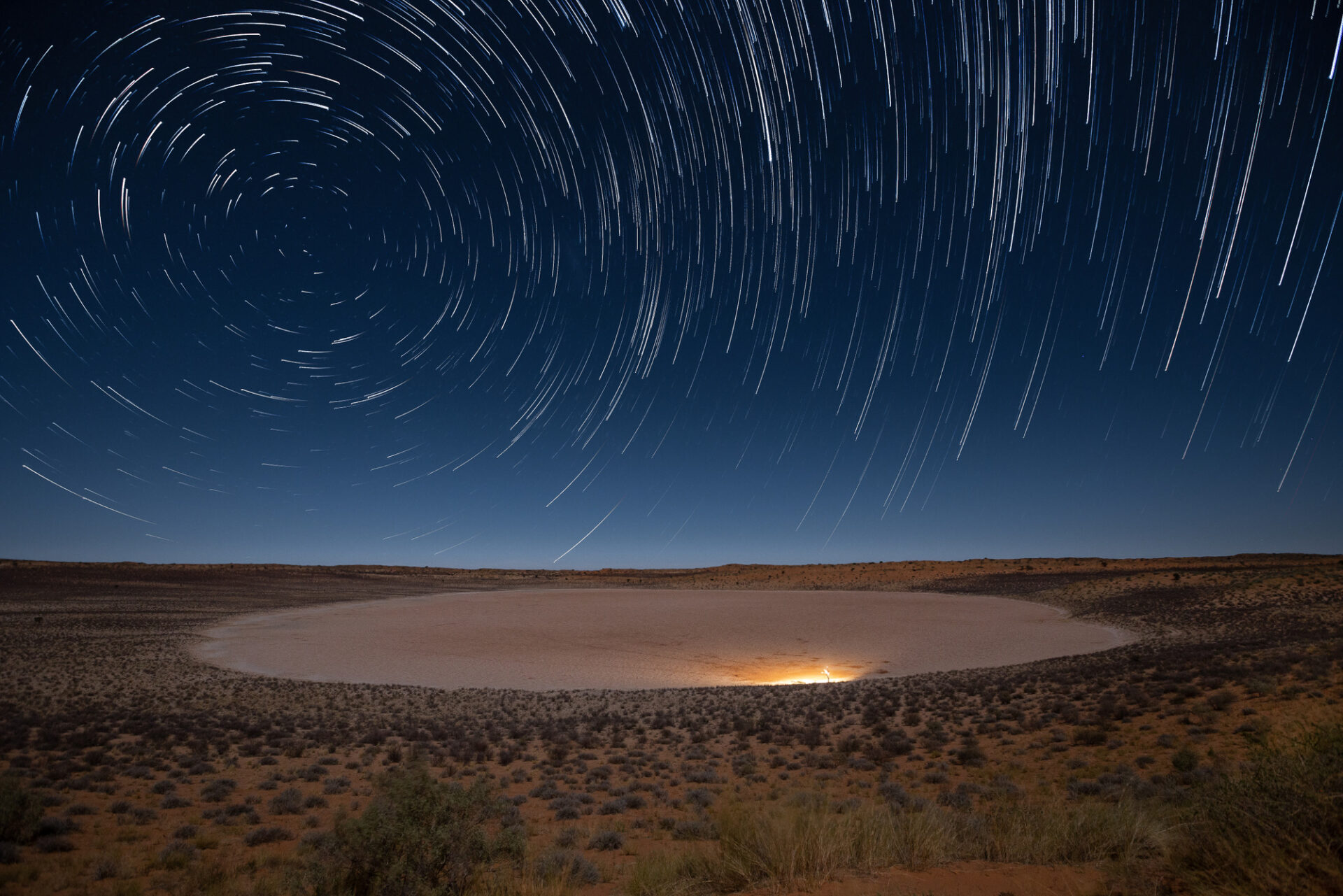 Why this is an important sustainable tourism story.

!Xaus Lodge is owned by two communities from one of South Africa’s poorest areas. The ǂKhomani are one of the oldest human races in the world.  Living sustainably, with a light touch was their way, long before it became the modern way. At the same time, tourism is being promoted as an economic revenue generator for poor rural communities. !Xaus Lodge offers a strong case study for the successful and sustainable implementation of this policy. In the first 12 years of operation, the Lodge generated more than R45 million in new economic turnover in the local area.  The reason that Dark Sky Certification is such an important sustainable tourism story is that it adds a new environmental dimension – and the visitor numbers are reflecting that interest.

The ‡Khomani San’s cultural understanding of the night sky is an important part of our human heritage. For nearly everyone the night sky raises profound philosophical questions about our place in the universe and our stewardship of planet Earth.  As journalist David Johnson reflected after visiting “If we lose darkness, we lose the best way to fully appreciate how insignificant we are, and the fleeting nature of our own existence.” He added after talking to a local ǂKhomani guide “When I told him that light pollution in many cities means few, if any, stars can be seen from them he looked saddened and said, ‘The heart of these cities and the hearts of their people must be in turmoil.’

The campaign for Dark Sky Sanctuary certification thus began in 2018, with the designation being awarded during WTM Africa in 2019. The preliminary campaign to get Dark Sky designation for the area had failed because the International Dark Sky Association (IDA) did not have a category that would work for a desert park with some of the world’s most feared predators. Their requirement for open access at night was at odds with the nocturnal hunting habits of the Black Maned Lion.  Professor George Tucker, a long-time friend of Southern Africa’s astronomical community, advocated with the IDA for the creation of a new category, specifically to accommodate unique environments.

To be awarded this designation a solid ‘’back of house’’ program was implemented to retrofit all lights and shades, replace unfriendly lightbulbs and curb unnecessary light use. We learned the role of artificial light in damaging the environment, and the techniques to reduce light usage without compromising safety. Light spillage is a coming sustainability issue in a world where a reduction in energy usage is imperative. Light reflecting up into the atmosphere is wasted. This is simply wasted energy and harming the environment

The target audience for the campaign covered all stakeholders in the area: the community owners, the Lodge staff and, importantly, all guests. In addition, an added benefit of modern communication is that anyone exposed to marketing communication from !Xaus Lodge will become aware of the beauty of Dark Night Skies anywhere in the world. 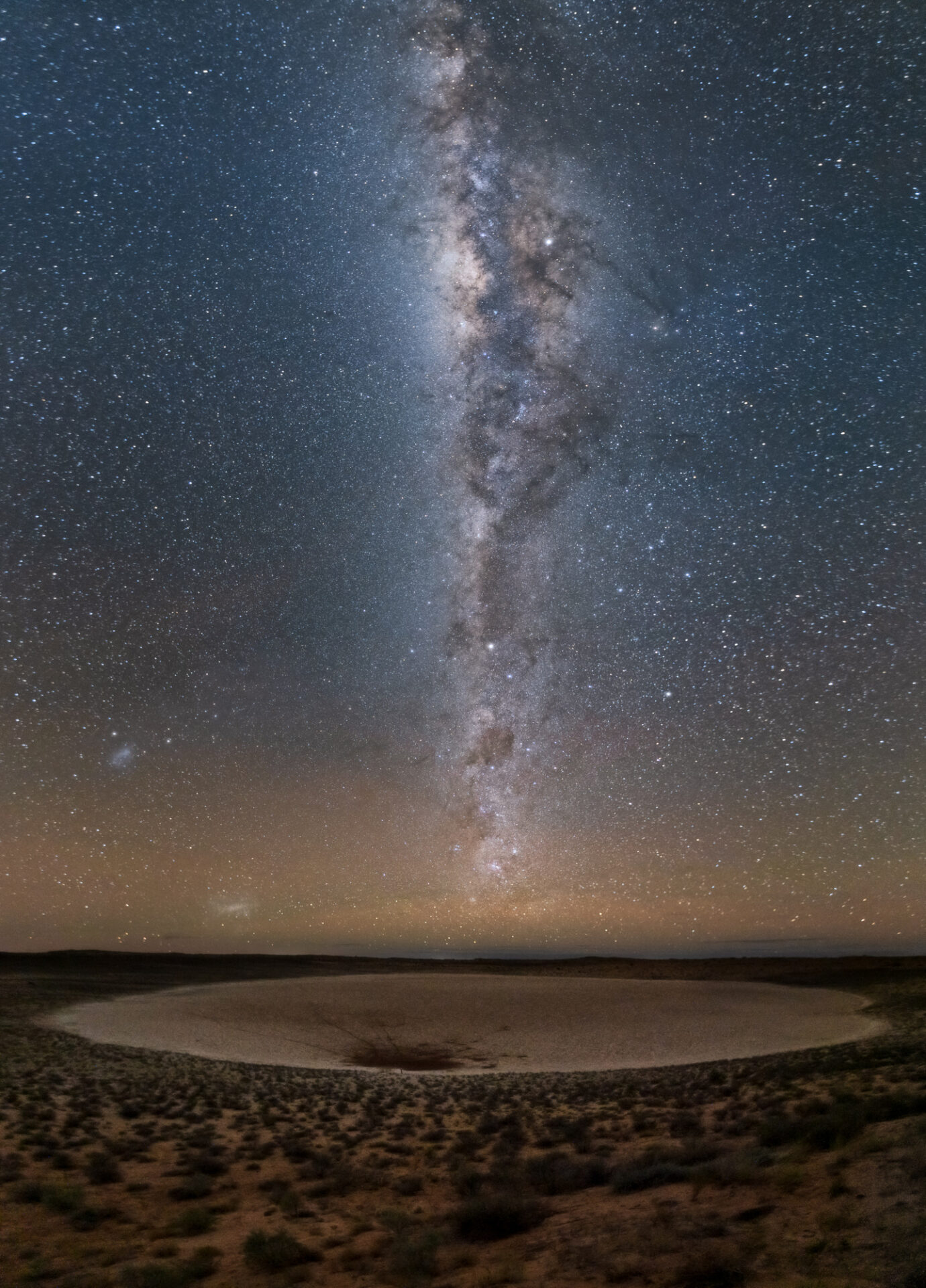 Dark Sky certification brings a range of benefits and responsibilities. There are lighting practices to follow, as well as outreach to the local community and all tourists.  Annual reports will be due from late 2020, and all future developments in the Park must follow the certification mandate.

This is important for the development of astro- and adventure tourism to the area.  Ongoing monitoring and feedback will ensure that this sustainability plans will not be relegated to ‘’last year’s campaign’’ but remain alive into the future.

In November 2019 National Geographic Traveller surveyed their social media followers:  Would you rather explore a geographical wonderland at the Grand Canyon, or spend a night counting the stars in in the Kalahari desert?   A photo of !Xaus Lodge at twilight set the scene.  Star gazing at !Xaus Lodge in the Kalahari won the international vote by 58% to 42%.  This is a benefit of Dark Sky certification. !Xaus Lodge, a 24-bed community-owned property, generated international tourism recognition to the point where National Geographic Traveller nominated the Kalahari (with !Xaus Lodge as the place to stay) as one of the Top 20 places in the world to visit in 2020.

National Geographic Traveller listing is not the only proof statement of the market’s approval of the Dark Sky Sanctuary status. The most powerful indicator is the current and forward bookings that are much healthier than were otherwise projected. Our growth rate in the period since certification is 9% higher than we had expected.

The Dark Sky Sanctuary certification has been embedded as a ‘’way of life’’ at !Xaus Lodge. Even the marketing messages have absorbed the information into the same timeless themes as dune walks or sundowners at sunset.  From a visual point of view, the social messages mentioning or discussing the Dark Skies have doubled since certification. Traffic generated by top-class astro-photography is now equal to the traffic that an excellent predator image will generate (typically the most popular posts).

Much has been written about the challenges of the ‘’always on’’ society, the pressures of social media and the insidious nature of fake news. !Xaus Lodge does not have TVs or WiFi. Reading the newspaper of the morning involves a walk through the dunes, looking for the tracks and spoors of the nocturnal animals.  Modern reliance on easy transport is also at odds with the !Xaus Lodge way. Our address is ‘’Dune 91, off the Auob River Road” and the last 35 kms are over a roller-coaster of 90 sand dunes, requiring 4×4 transfers.

Simply put, the environment that tourists find at !Xaus Lodge is so different from their own lives, and the typical tourism operation, that it is a perfect place to help people see a different way of doing things. The Dark Sky Campaign reminds us that it is a special place to teach people about sustainability.

The Dark Sky Certification campaign means that !Xaus Lodge has been able to leverage the timeless wonder of the night skies, and its major educational role, in both marketing the detitanation and environmental sustainability.

!Xaus Lodge is not only under African skies, but a primary guardian of the African Night Sky. 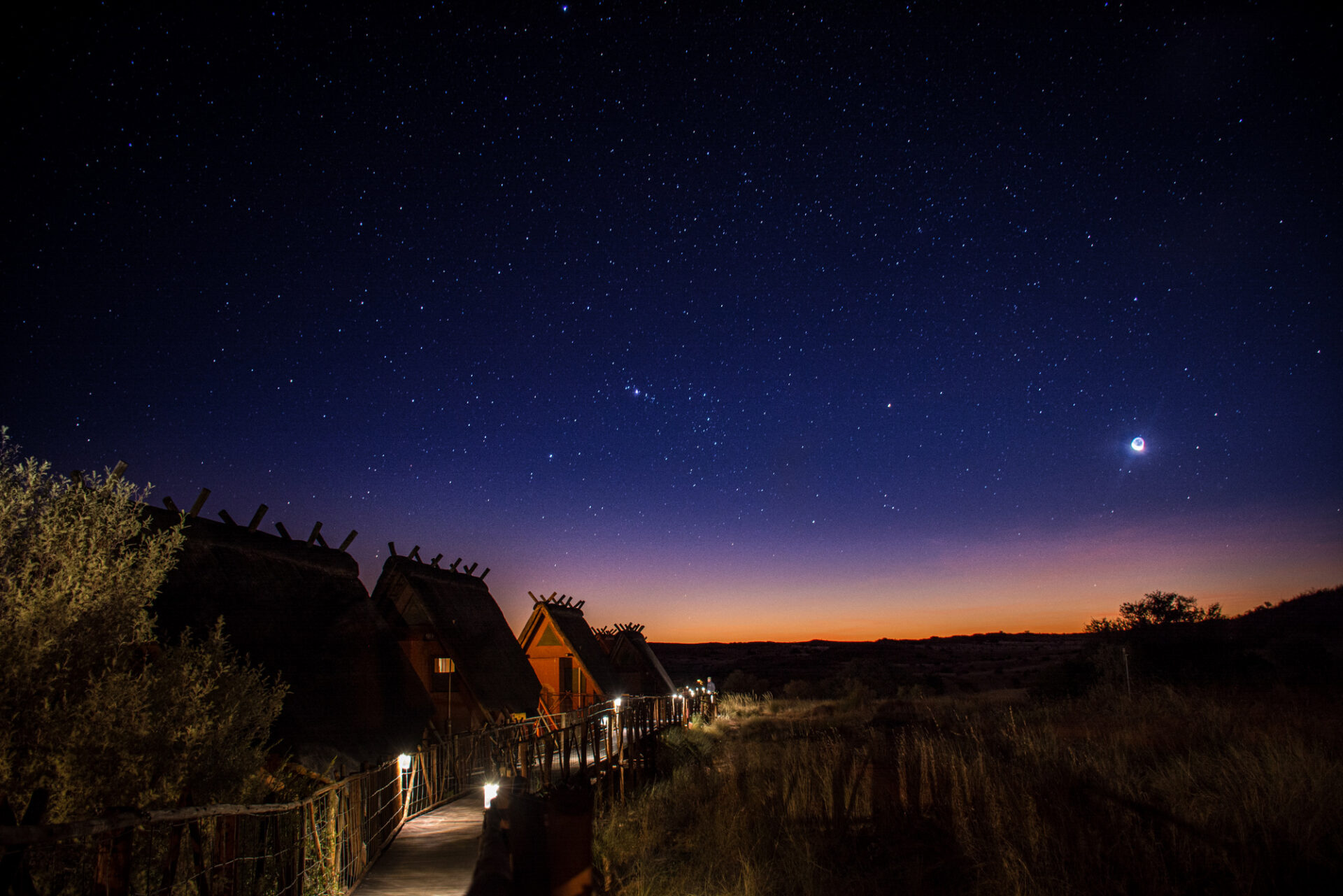